On this site you will find information and patterns for the gods and goddesses on the Olympus and in the Underworld. Feel free to use or adjust existing patterns for other gods. All details of vase paintings are taken from Theoi.com unless otherwise stated.

Aphrodite (Venus in Roman mythology) is made after the famous statute Venus de Milo. The position of the statue’s arms has been the topic of lots of research, but the puppet’s arms can go many directions. 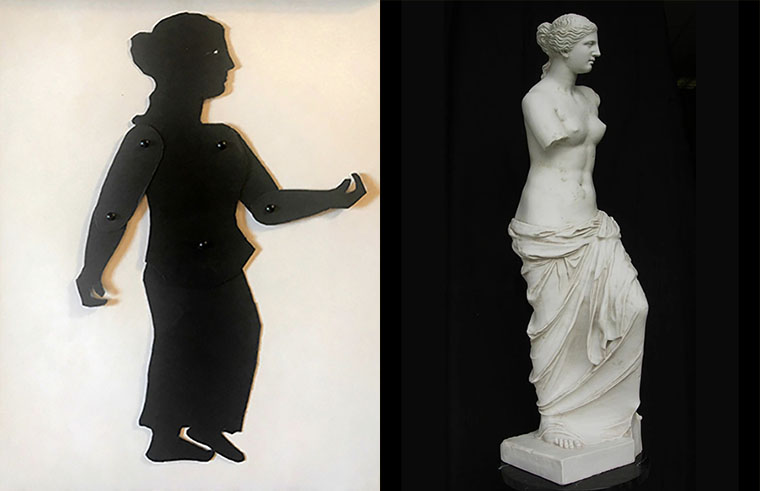 Apollo, the god of (among others) music and poetry, is usually shown beardless. The puppet’s lyre is made with metal picture wire, but can also be made with a rubber band or thin string, taped to the lyre frame. The lyre is attached with velcro to his hand and shoulder. One knee can bend to allow Apollo to sing ballads and beg Daphne to return his love. 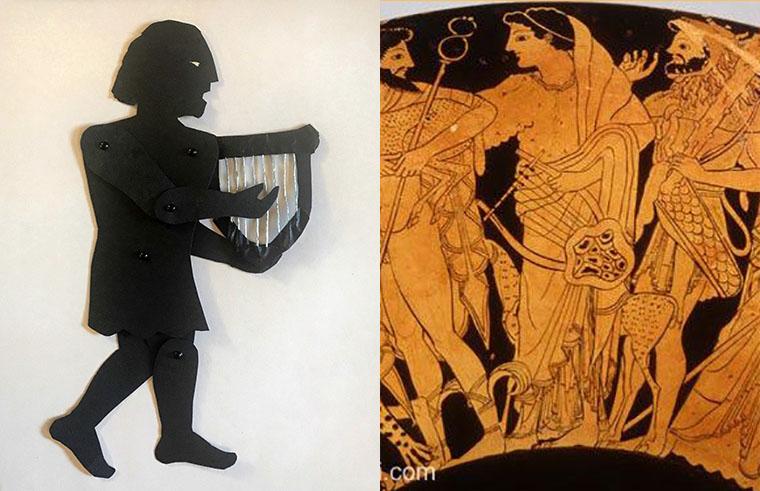 Ares, the god of war, is always depicted with a helmet, and often with a shield and weapons. The puppet’s shield and sword are attached to the hands with velcro. 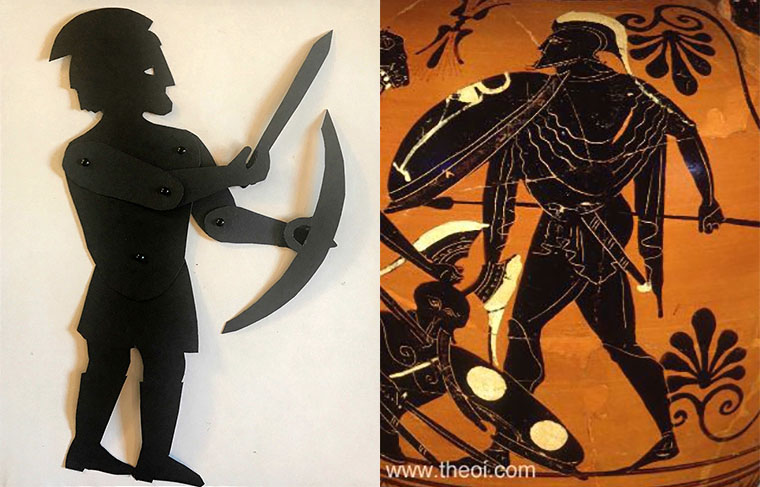 Artemis, the goddess of the hunt, is usually shown with bow and arrow, and sometimes also with a quiver. The puppet’s quiver, holding barbecue skewer arrows, is attached with velcro to Artemis’ back. The paper bow is fortified with metal wire and black painter’s tape. The fingers pulling the string are fortified and lengthened with black tape for a better grip.  The arrow is attached to the inside arm with velcro. 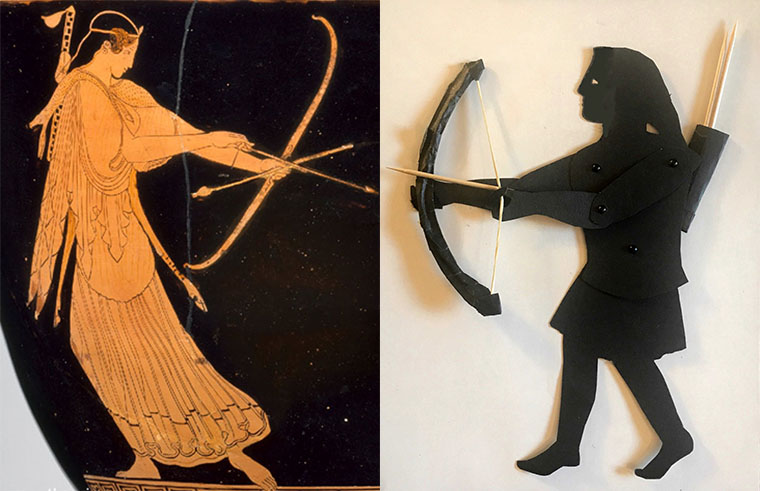 Athena, the goddess of wisdom and smart warfare, helped Perseus slay Medusa, after which she put Medusa’s head on her shield. Sword and shield are attached with velcro. Medusa can be found here.

The puppet of Demeter, the goddess of agriculture, is shown with a sad expression, as she grieved the absence of her daughter Persephone during fall and winter. Bent forward, she can try to pull Persephone back from from the entrance to the underworld. 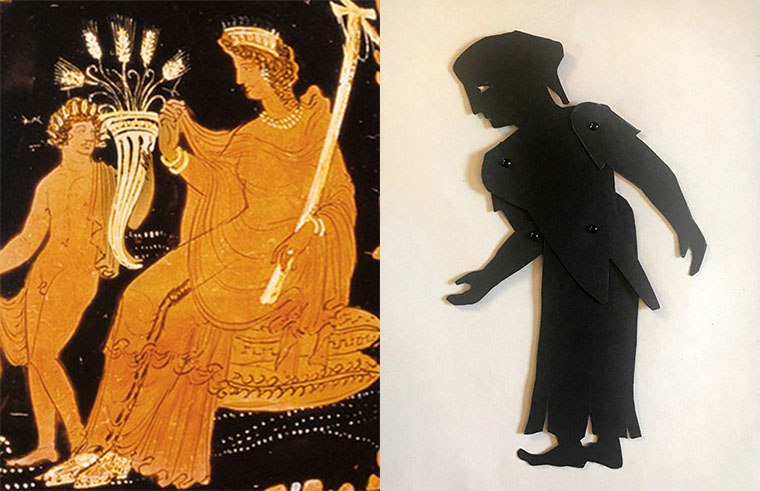 Dionysus, the god of wine and pleasure, is usually shown with a drinking cup, attached here with velcro. 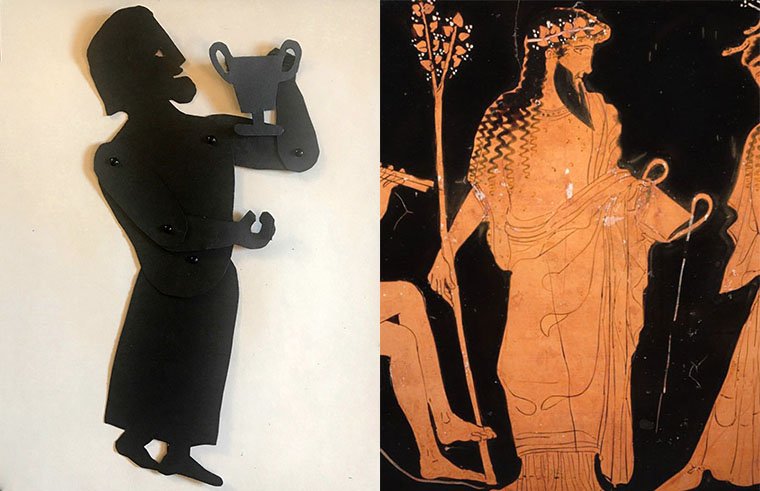 The puppet of Hades, the god of the Underworld, is shown reaching up when trying to grab Persephone, while she is picking flowers in the world above him. 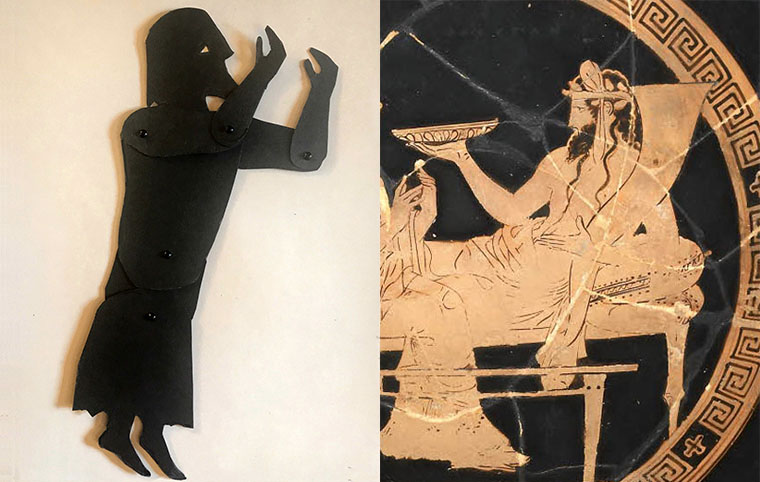 The puppet of Hephaestus, the god of fire and metalworking, is wearing a working cap, with which he is often depicted on Greek vases. 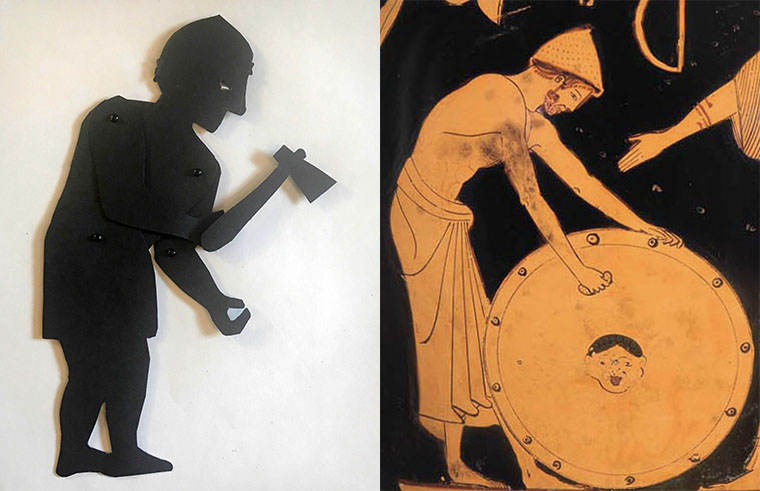 Hera, the wife of Zeus, is often seen wearing a crown. The puppet’s face is borrowed from a vase painting in which she is seen angry when finding the baby Herakles, Zeus’ son from another mother, drinking her breast milk. In many myths Hera is angry because of Zeus’ liaisons with other females.

The puppet of the god Hermes, the messenger of the gods, has knees that bend, allowing him to run, fly, kneel, and sit. 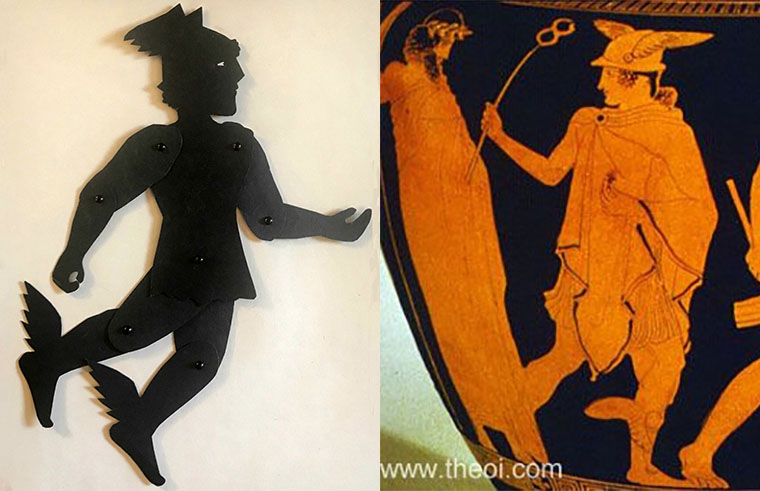 Hestia, the goddess of hearth and home, who gave up her throne when Dionysus joined the gods on the Olympus, is usually depicted sitting. Shown here in a kneeling position, the puppet can attend the fire. 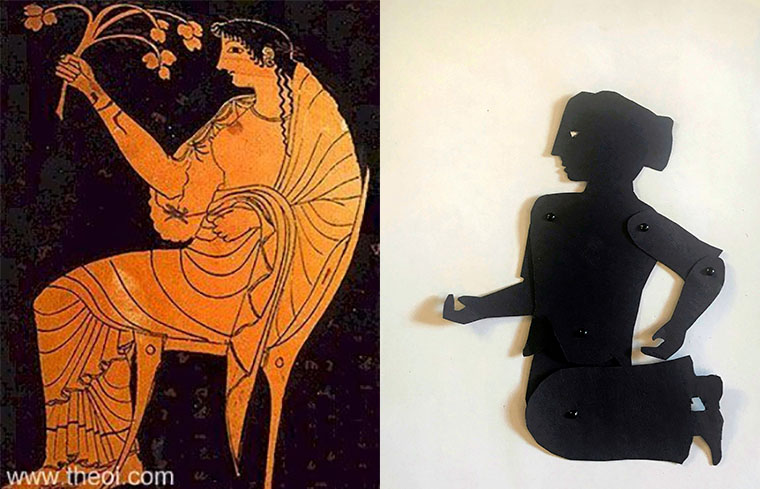 Demeter’s daughter Persephone can both kneel to attend to plants and sit on a throne as queen of the underworld. 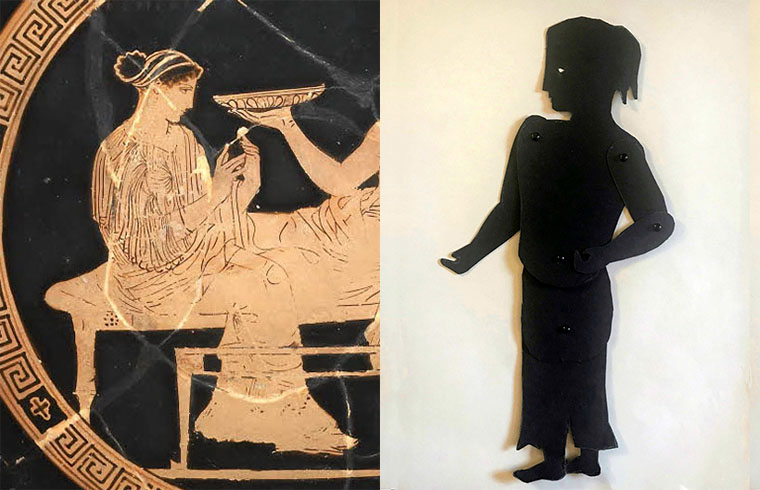 Poseidon’s trident is made with a cutout top, attached to a barbecue skewer that is wrapped with black painter’s tape. 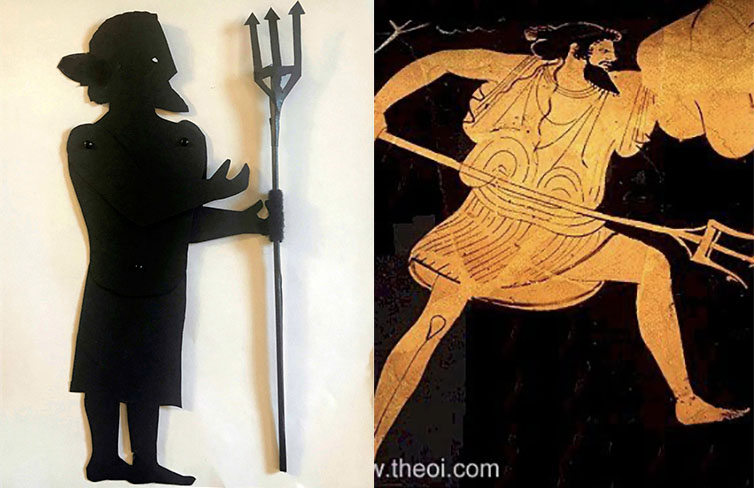 The puppet of Zeus, who can sit on his throne. is shown here with lightning bolts made of picture hanging wire. They are attached to his hand with black painters tape, which can easily be removed. 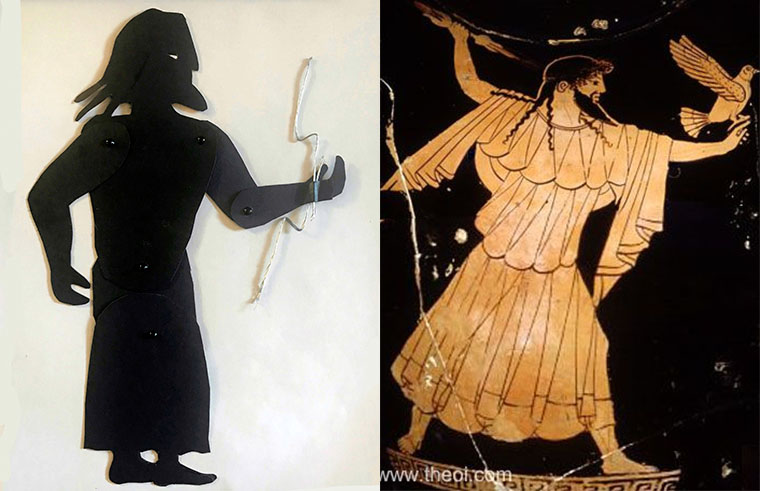