On this site you will find information and patterns for demi-gods, heroes (male/female), monsters, and other mythological creatures. If you cannot find a male of female character that you would like to make feel free to use or adjust existing patterns for others. All details of vase paintings are taken from Theoi.com unless otherwise stated.

Ariadne is best know for the story of Theseus and the Minotaur, as she gives him yarn to find his way in the labyrinth. You can use any yarn or wool that you can find and roll it into a little ball, which you can press to the bristly velcro on the back of her open hand, while using the other (half closed) hand to guide the yarn. Theseus can hold the other end of the yarn while going into the labyrinth (for instructions for the labyrinth see “Minotaur.”) There are various versions of how Ariadne ended up as the wife of the god Dionysus, including ones in which Theseus was told by Athena or by Hermes to leave the sleeping girl to be woken by Dionysus. 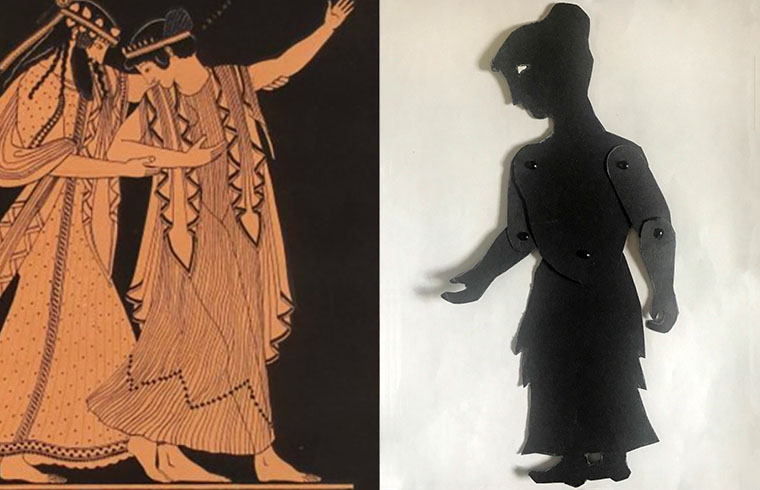 Hades’ three-headed dog is made of two parts, which allows him to jump and snap. 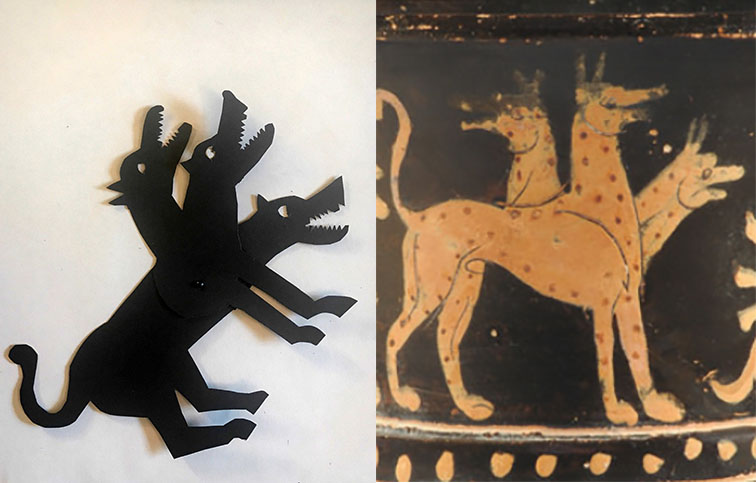 Charon and his boat

Charon, the ferryman of the dead in the underworld, can make a rowing movement with an oar that dips the water below the boat. There is space for two more people on the boat, so the puppet can be used for the story of Orpheus and Euridice. Use a hole puncher for the boat’s decorations 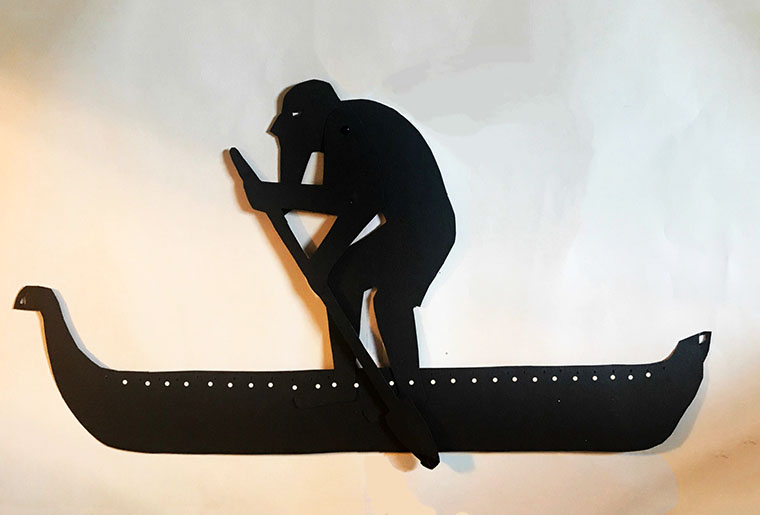 When Heracles found a way to defeat the Lernaean Hydra (his second labor), Hera got so furious that she sent a giant crab to come to the aid of the nine-headed snake. Heracles crushed the crab beneath his feet, after which Hera put it in the sky as the constellation Cancer (Carcinus). 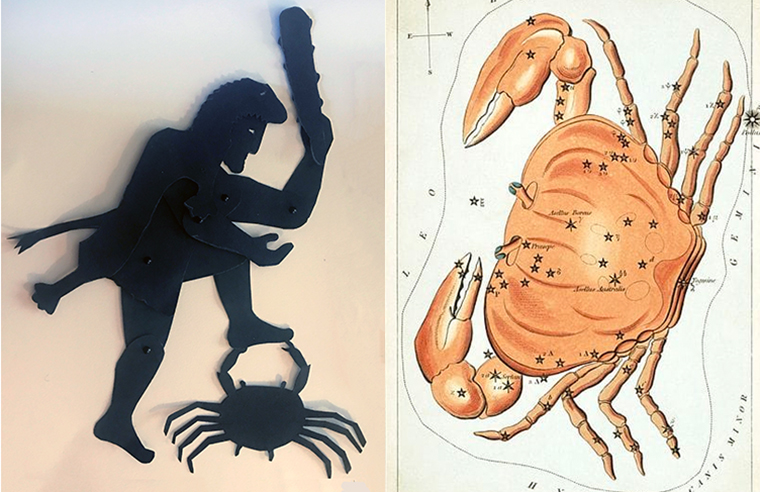 The nymph Daphne, who was pursued by Apollo but resisted his advances, is shown with two hands that push him away. She can turn into a laurel tree by moving a cutout tree or plant up behind her. 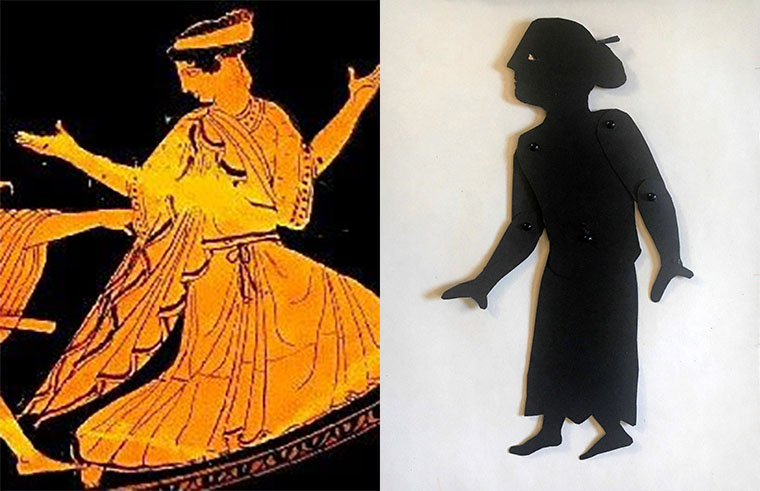 The Gorgon sisters were three winged monsters with snakes instead of hair, of whom only Medusa (shown next) was mortal. To act out the story of Perseus and Medusa you can use this pattern twice. The cutting of the snakes requires precision and small scissors (I used the smallest size hole puncher for the snake eyes). Feel free to adjust and simplify the snakes, I recommend punching only one instead of two eyes). 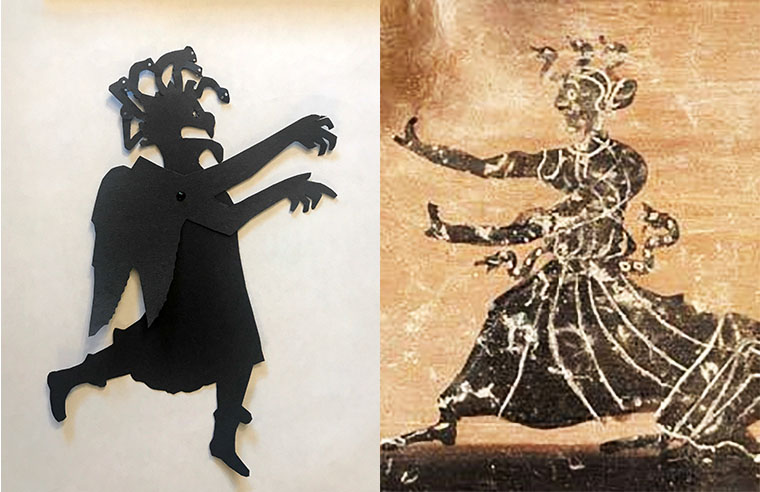 After Heracles killed the Nemean lion with his bare hands (his first labor), he wore its skin with his head peeked out of its gaping jaws. On vase paintings Heracles is usually depicted with the lion skin as his main attribute, as well as his club. Both appear on the pattern, which should be attached to Heracles with velcro. 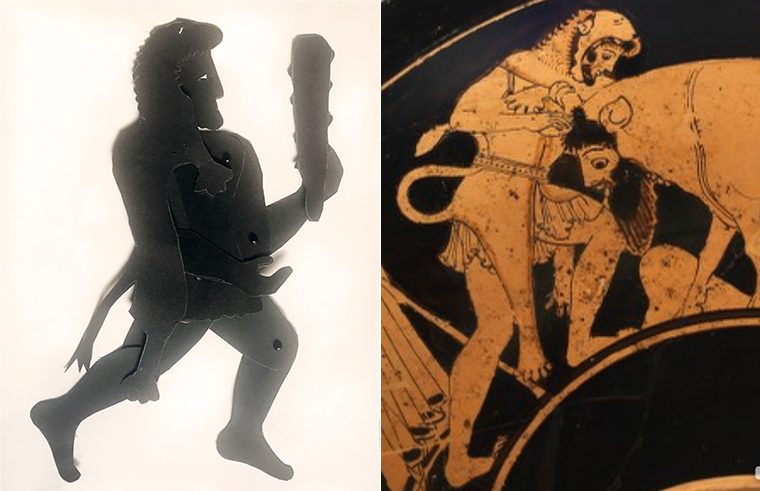 The Lernaean Hydra was a nine-headed water-serpent in the swamps of Lerna, which Heracles (Hercules) had to destroy as the second of his labors. For each of the heads that he cut off, two more grew. He managed to kill the hydra with the help of his nephew Iolaus, who cauterized each neck with a torch after Heracles beheaded it. The pattern includes nine separate heads with long necks and four small ones.  The long necks are each attached to the body with brads underneath a stump, and can be pushed down when the head is slain. To regrow two heads, a small head should be attached to a slain head with velcro. The pattern also includes  the giant crab that Hera sent to help the Hydra, which Heracles crushed under his foot. 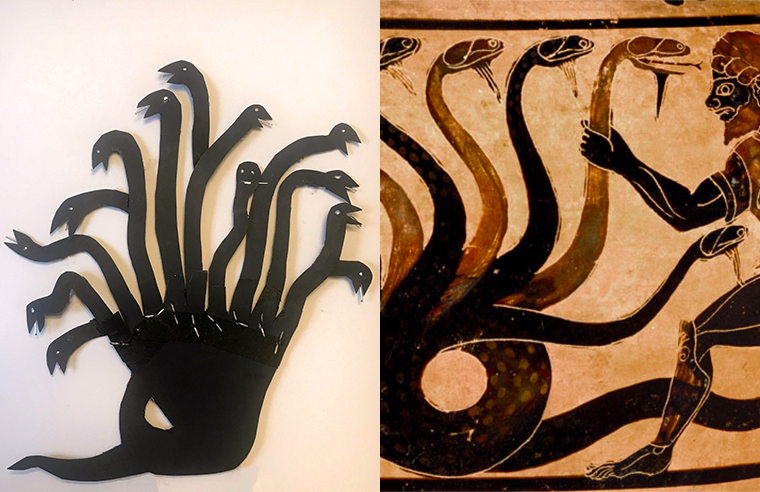 In order to be able to slay Medusa’s head the head and body need to have separate holding rods. 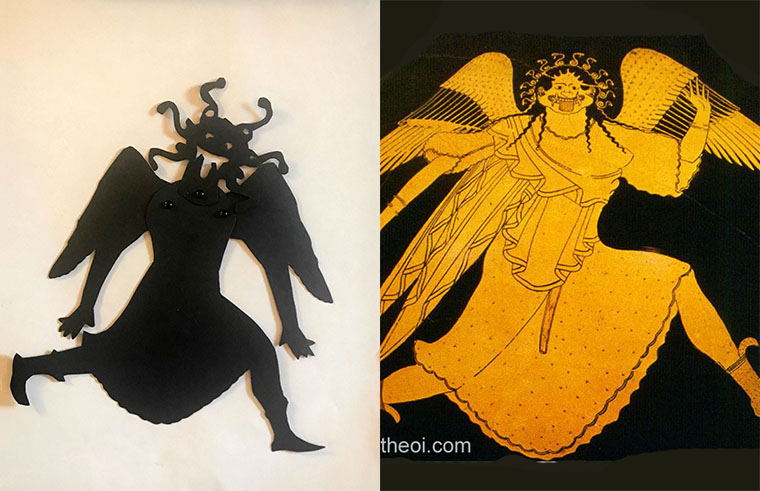 The Minotaur was kept in a labyrinth, where Theseus had to find and fight him. A labyrinth wall can be created with a piece of black posterboard (circa 12″ wide x 5″ high) and two holding rods at either end. To make Theseus appear to find his way through the labyrinth just let him turn around and walk left and right while holding the end of a piece of yarn above the wall. Keep Ariadne waiting on the left at the entrance and the minotaur on the right. To avoid the velcro on the rods for Theseus and the Minotaur getting tangled up when they fight you may want to use duct tape for Minotaur’s rods instead.

Heracles (Hercules) wrestling the Nemean lion (his first labor) is one of the most depicted scenes on Greek vases. Heracles used the lion’s skin as his cape, his most distinctive attribute in Greek and later art. The lion skin with its gaping mouth is added to the pattern for Heracles. 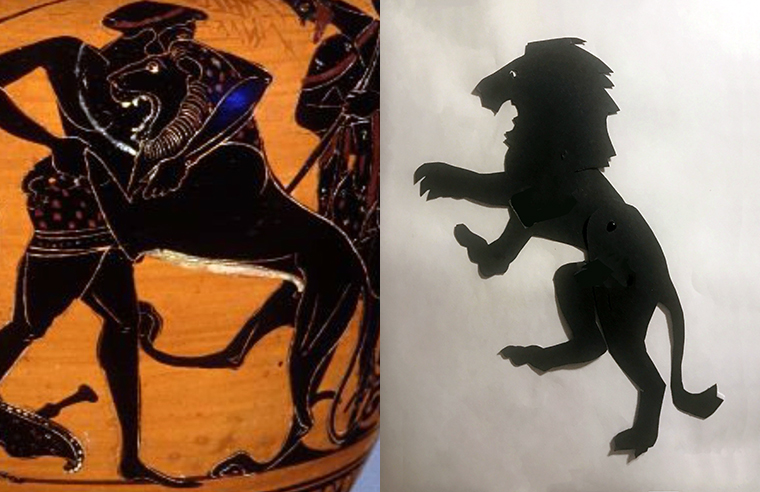 Pegasus, who came out of his mother Medusa’s body when her head was slayed, can fly by having one holding rod attached to the body and two moving rods attached to the wings, which can be moved simultaneously with one hand. 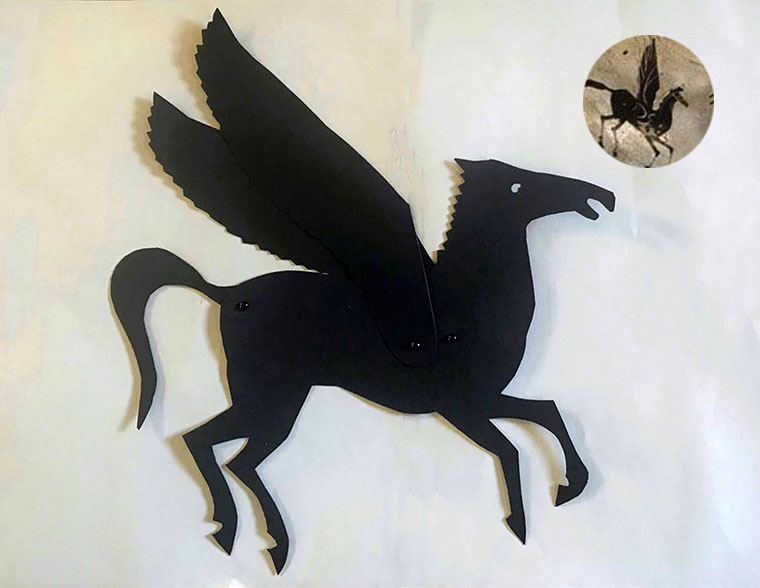 To slay the Gorgon Medusa, whose gaze turned people into stone, Perseus was provided with Hermes’ winged sandals, a curved sword, and a pouch to carry Medusa’s head. In addition he got an invisibility cap and a mirroring shield that allowed him to look at her face without being petrified. The puppet’s head turns on a rotating rod attached to the back. Although Perseus is often depicted with a winged helmet, the puppet’s invisibility cap does not have wings to avoid confusion with Hermes. 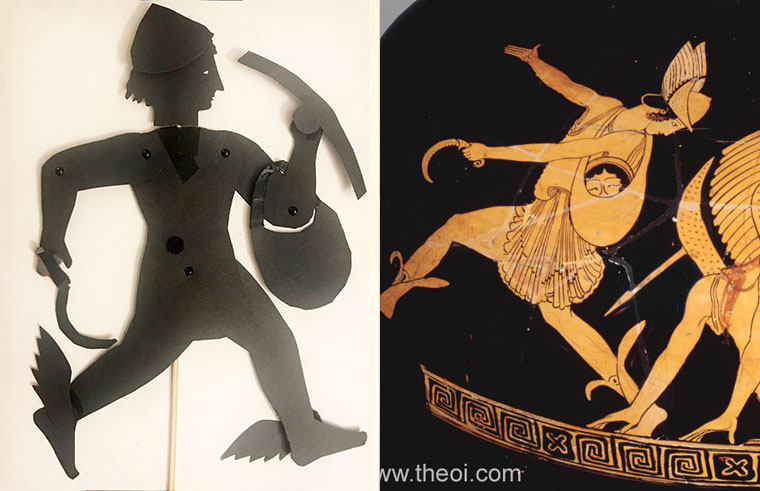 Theseus is best known for slaying the Minotaur, although there are many more heroic stories. For instructions how to simulate a labyrinth and use Ariadne’s yarn see “Minotaur” and “Ariadne” earlier on this page. 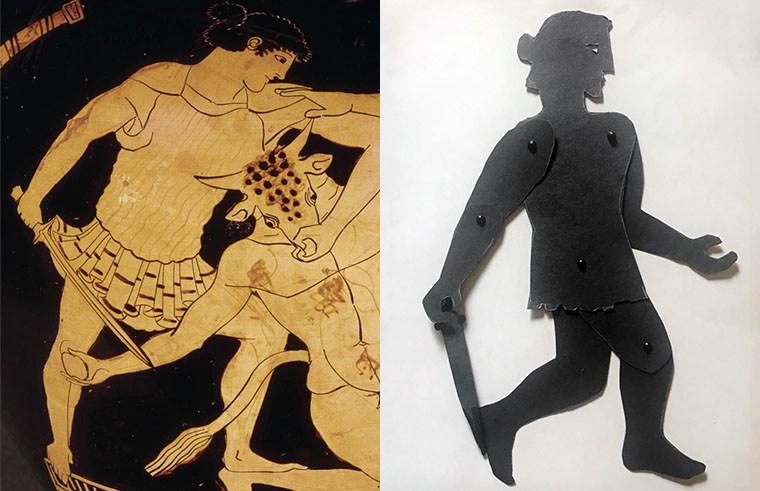