Shadow puppetry is a great tool to engage children with stories from the Underground Railroad–the network of free Blacks, Quakers, and abolitionists who helped people enslaved in the South escape to the North in the decades prior to the Civil War. Puppets can easily hide, use disguises, and escape with horses, boats, and wagons. In these stories of ingenuity, courage, and secret communications all fugitives and helpers are heroes, and all children can play a part.

In an earlier blog I wrote about a trial with a class of 5th graders in which we acted out the story of Henry “Box” Brown. This post is about a follow-up visit in which we used a scrolling background to act out stories about Harriet Tubman, one of the most famous “conductors” on the Underground Railroad.

Harriet Tubman (c. 1822-1913) escaped slavery in Dorchester County, Maryland in September, 1849, when she fled to Philadelphia. In the following decade she led about 70 fugitives to freedom during thirteen trips back to Maryland, mainly family and friends. In addition, she instructed a similar number of people to escape on their own. During the Civil War she served as a nurse, spy, and scout. William Still, author of The Underground Railroad, wrote about her:

In courage, shrewdness and efforts to  rescue her fellow-men, she was without her equal. Time and again she made successful visits to Maryland on the Underground Rail Road, and would be absent for weeks at a time, running daily risks while making preparations for herself and passengers. She seemed without  personal fear. The idea of being captured by slave- hunters or slave-holders, seemed never to enter her mind.

For this project  I created a transparent scroll to serve as a moving background to illustrate Harriet’s journey from Dorchester County, Maryland, to Philadelphia. To simplify the story I took some liberties with the historic details, and made her travel through Maryland only (crossing the Mason-Dixon line, marked with line posts), although she went through Delaware and possibly New Jersey. I also wrote a script, which was read out by the teacher. The story ends with the arrival at the office of the Pennsylvania Anti-Slavery Society in Philadelphia where she met William Still. In the second half of the visit the students acted out one of Harriet’s many trips back, to rescue her three brothers. The children had made puppets in advance using instructions and templates. 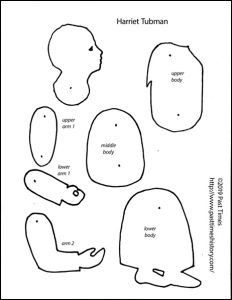 The puppet of Harriet Tubman was based on a portrait bust, made by Lori Kiplinger Pandy’s using a technique described in my blog post about how to make a puppet of a historical figure. To facilitate  the process of making puppets  I put templates online in the Printable Library. Students are encouraged, however, to do historical and image research online and adjust faces, shapes, and clothes. If they prefer to make a historical puppet with their own features, they can use a profile photo of themselves using the same technique as I described for historical figure.