An earlier version was published on March 23, 2019

On March 23, 1849, months after his wife and children were sold to a new owner, Henry Brown escaped slavery in Richmond, Virginia in a wooden box, sent by express mail to Philadelphia. After a harrowing 27-hour-long trip by railroad, steamboat, and wagon (part of it upside down) he arrived unharmed at the office of the Pennsylvania Anti-Slavery Society on Saturday morning, March 24, 1849. He had decided on an “arrival hymn” in advance, should he survive the journey. Henry Brown described singing the hymn in his own Narrative, as did William Still in his account of Brown’s arrival in the box.

The hymn, which was soon printed in a shortened and full version with a depiction of the box, marked the beginning of Henry “Box” Brown’s career as a performing artist. He toured the country as an antislavery speaker and performer until the Fugitive Slave Act of September 18, 1850 forced him to move to England, where he continued to tour with a moving antislavery panorama.

The story acted out as shadow play

In 2019 and 2020 I partnered with 5th grade teacher Davie-Lyn Jones Evans using the story of Henry Box Brown as a Black History Month project to teach about slavery and the Underground Railroad. While I used shadow puppets to act out just scenes of the story in 2019,  I tried out a scrolling screen in 2020.

Shadow play of the story of Henry Box Brown, 2020

The brief video above may be used as an introduction to the story prior to students making their own shadow puppets to act out parts of the story or sing along with the song that Henry Box  Brown wrote about his escape from slavery.

The song “Escape from Slavery”

Like the Hymn of Thanksgiving, the song Escape from Slavery was printed to help his cause, both with a depiction of the box and without. Brown set the lyrics to commemorate his “fete in the box” to the tune of Uncle Ned, a popular minstrel song at the time. As Brown’s biographer Jeffrey Ruggles describes in The Unboxing of Henry Brown, by 1849 blackface minstrel shows were the most popular form of entertainment in the North. Abolitionists hated the racist genre, but as singing was an integral part of antislavery meetings they turned some minstrel songs into abolitionist versions by changing the lyrics.

Using the song as an educational tool

The song may be used as an interactive teaching tool about slavery and the Underground Railroad and the innovations in transportation and postal services in the 1840s, which abolitionists and fugitives used to their advantage. The song describes the various stages of Henry Brown’s 27-hour-long journey from Richmond to Philadelphia by Adams Express, which is described in detail by Jeffrey Ruggles and may be followed in this virtual field trip online.

Sing-along version of Escape from Slavery (electronic with lyrics)

The “Hymn of Thanksgiving”

The Hymn of Thanksgiving that Brown sang can be found as an anthem in The Old Colony Collection of Anthems, 1819. Prior to his escape, Brown was a  member of  the First African Baptist Church in Richmond, Virginia, where he may have learned the song.  As Jeffrey Ruggles wrote in his biography of Henry Brown, the church had only split into a white and a Black church in 1841. When I contacted him in February 2019 to ask about the original anthem in the Old Colony Collection, Ruggles suggested that the hymn may have entered the choir repertoire before 1841.

Using shadow puppets to act out the story

The number of people involved in the story and the size of the vehicles make acting out the story on a small screen complicated. As this class performance of the story of Henry Box Brown shows, however, the story makes for an excellent class project with a bigger screen.  The puppets used in the performance were created and designed by students themselves.

Templates for the puppets of Henry Brown and William Still, who was present when the box arrived in his office, may  be downloaded from our Printable Library. All other puppets can be created from templates in the 19th century mix and match section.

With many thanks to Jeffrey Ruggles for sharing his insights, and to Rob Wegman for his arrangement of the Hymn of Thanksgiving and creating the scores and mp3 files of the music 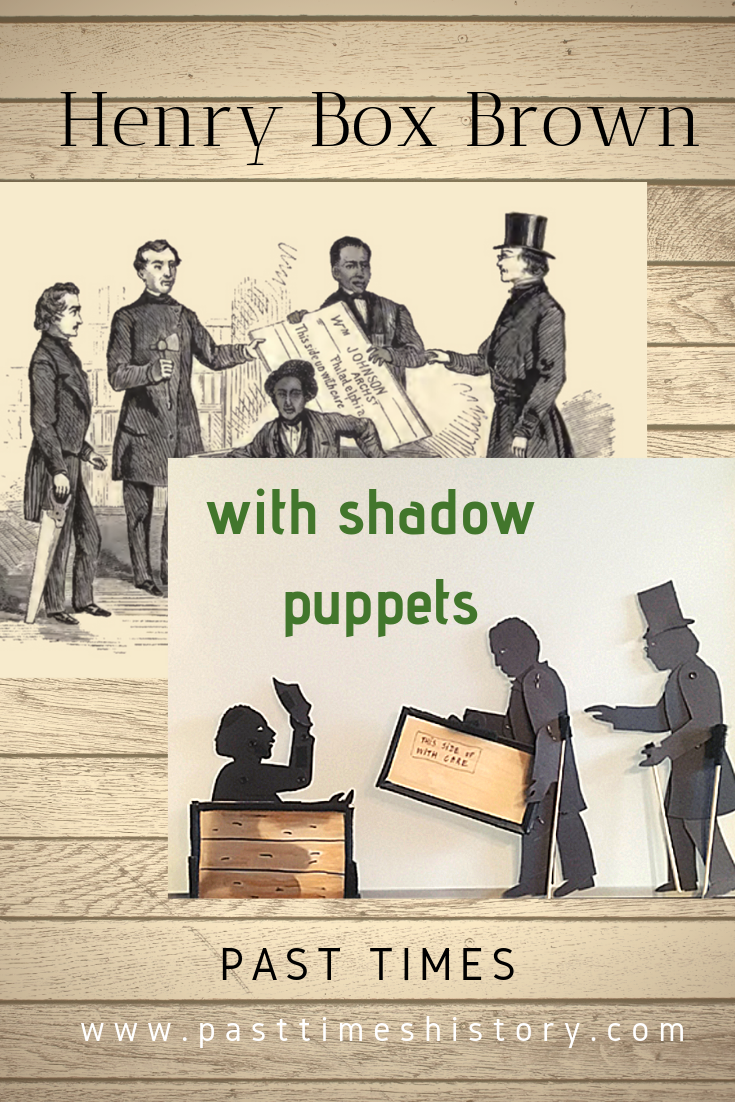