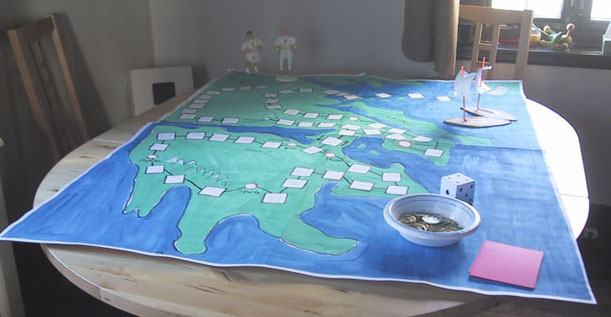 If your child, like my nine-year old son at the time, is really into Greek mythology and you are looking for some creative fun preparing a birthday party, you may like to use some of these ideas. I went a little crazy and made a whole board game, but you could also just use the cards for labors, questions, and oracles. The game can be adapted to different ages and numbers of teams. For this party, I had two teams (team ‘Perseus’ and ‘Theseus’), with an equal amount of ‘experts’ in each team who happened to know more about Greek myths. The game lasted about an hour, after which the winning team could first hit the piñata of the Trojan horse (after which the candy was equally distributed over the party bags).

To make it more fun I made the board game table size, using four white poster boards taped together, a black marker, blue and green paint, and label stickers cut in halves for the steps. I used the map at the front of D’Aulaires’ Book of Greek Myths for reference, having Mount Olympus in the upper left corner and Troy in the upper right.

For the pawns I dressed two action figures from the dollar store in a white piece of cloth and taped them to a standard. The Trojan horse was a de-feminized party piñata horse (girly eyes replaced and manes taken off).

For ships to reach Troy I used card board for the flat base, and bendable straws and paper for the sail. The dice was made of a small white cardboard gift box. We used party coins for tokens, which can be replaced by candies.

Cards for the twelve ‘labors,’ the questions, and the oracles to deciphered were printed on card stock, cut into four pieces.

Object of the game

The object of the game is to enter the city of Troy first. This can only be done by collecting enough tokens to buy a ship to cross the Aegean Sea and to build the Trojan Horse at the gates of Troy. Tokens can be earned by answering a question, or by doing a labor. Teams can also lose tokens by having to sacrifice to one of the gods. A condition to enter the city of Troy is that all the children (in both teams) have done a labor.

In my game I had 12 spaces for labors, 12 spaces for questions, 12 spaces for sacrifices to one of the Olympic gods, and 4 spaces for oracles (for explanation see below). In addition, I had a few towns and 12 general spaces with directions, such as “You opened Pandora’s box. Skip one turn to deal with miseries’; “The Pythia predicts your future. Move three spaces ahead,” and “Eris wants to cause discord. Switch places with the other team” ) .

Labors earn two tokens instead of one. Each child has to do at least one labor. There are (because of the Hercules myth) only twelve labors.You do not need to do all labors if you have less than twelve children participating. You may need to use up all twelve labors, though, if the team at the gate has to earn enough tokens for the Trojan Horse. If Troy is reached before each child in the team has done a labor the team at the Troy gate has to wait until all required labors are done.

All children in a team will take turns in answering questions. Although a labor earns a team two tokens, answering a question right gets you only one (this is to prevent the experts spoiling the fun). However, expert advice can be asked from the members of his own team before the question is answered. If the answer is wrong, the question goes to the other team. Many trivia questions can be found online. Make sure you have plenty of questions in case a team has to earn extra tokens.

Messages from the oracle of Delphi were often garbled, and left for the visitors to figure out. You can use word scrambles, riddles or other puzzles (make sure they only take 2 or 3 minutes). The team can only move forward when the message is deciphered. You may get some ideas from this free puzzle maker site .

Give each team two tokens to start. A sacrifice costs a team two tokens. The ship to cross the Aegean Sea costs 8 tokens, and the Trojan horse 6 tokens. If a team does not have enough tokens to pay for any of these, they can earn extras by doing a labor or answering a question on the spot. Before a team can win by buying the Trojan horse and entering Troy all children in both teams must have done a labor.