In our post about acting out Greek myths we have touched upon the heroes Perseus and Theseus. The most popular hero however (as seen in Greek art) was Heracles, often known for his Roman name Hercules. After killing his wife and children in a state of Hera-induced delusion, he had to redeem himself by doing twelve labors. You can act these out with puppets using templates from the printable library, your personal drawings, images from Greek vases and art, and your own imagination. In this blog post some ideas and tricks to use at home, in the class room, or (during the Pandemic) over Zoom.

Before you decide how to act out the twelve labors, you need to know what format to use. Do you want to do proper shadow puppetry with a light and screen, at home or in a classroom? Or do you want just silhouette puppets without a screen? (Use openings in corrugated cardboard for the holding rods, as in the example below.) You may want to just act out the labors, or spend time to tell the stories. A lot depends on the purpose of your project: is it for a performance, an educational project at home, or a group project over Zoom? For a birthday party you could divide guests up in teams and make all options available.

To act out the first labor, you can use the cutout for the Nemean Lion in the Printable Library, or make your own. If you are doing it in a classroom with an overhead projector and a big screen, you can move the lion on the projector and let a student behind the screen wrestle with the projection (see Going bigger: using masks and direct projection).

During the second labor Heracles and his nephew had to figure out how to kill the nine-headed hydra and prevent the growing of duplicate heads after a head was slayed (solution: scorching the stumps with fire). It took me some time to figure out myself how to act this out, which you find described here (you may need more than two people). The necks and extra heads are fortified with thin metal wire that is taped to the paper with black painters tape, leaving a little loop for handling. During a birthday party you may want to get creative with licorice twizzlers instead and eat them afterwards!

Video tutorial how to turn an image of a mythological creature into a cutout using Google Drawings.

In most of his labors Heracles had to deal with other scary creatures: the Ceryneian Hind and the Erymanthian Boar (Labors 3-4), the Cretan Bull and the Horses of Diomedes  (Labors 7-8), Geryon’s Cattle (Labor 10), and Cerberus (already available) during the 12th labor. Some puppets may be adjusted, like Pegasus (without wings) for the horses, or Ares with three  heads for Geryon in the 10th labor. If you like to draw, please design your own puppets! If not, you can adjust existing images in Greek art or elsewhere online using Google Drawings. In the video above you will find how to turn them into cutouts in the right size.

It looks like Heracles’ 5th labor, cleaning the Augean Stables in one day, was too complicated to depict in Greek art. That means that like him, you will need to use your wits to act this out with puppets. Doing a Google image search or checking out YouTube may give you some ideas. Think of using see-through crinkling plastic or other transparent material (you can draw waves with permanent marker). Any suggestion of moving water will work on an overhead projector, behind a screen, or on a stand of corrugated cardboard.

Another time where Heracles particularly used his smarts was when he tricked Atlas, the bearer of the heavens, into bringing him the Apples of Hesperides (11th labor). You could use Google Drawings again to adjust images of Atlas that you find online and adjust an existing printout of a strong puppet (including Heracles). Make sure that your puppet has arms that can carry the heavens (in later art usually depicted in the shape of a globe).

During Hercules’ sixth labor, in which he had to drive away the Stymphalian birds, he got help from Athena, who gave him noisemaking clappers, made by the god Hephaestus. You will need extra helpers to move the birds and make lots of noise, including bird screeches. Use metal wire instead of holding rods to keep the birds high in the air (you may connect several birds to one wire). You can find a bow and arrow in the pattern for Artemis but feel free to try making a catapult like on the Greek vase below with elastic band.

For his 9th labor, fetching the belt of Hippolyte, queen of the Amazons, Heracles got the help of  his friends to fight the female warriors. Charmed by the hero, Hippolyte offered to just give him the belt to help him out. Angrily, Hera intervened and made the Amazons think they were betrayed. If you don’t want to engage in battle (for which you would need many puppets and puppeteers), you could just focus on the interaction between Heracles and Hippolyte.

Heracles and some of the creatures he killed ended up as constellations in the sky, including the Nemean Lion (Leo), the Crab (Cancer), and the Cretan bull (Taurus). In a classroom you can use an overhead projector to show these constellations in various ways. At home you can do this by using black poster board. Punch holes for the stars and draw the figure around them with a light color pencil or crayon, or a silver permanent marker. If you use a screen you can tape it on top, or just hold it up and shine a flash light behind it.

If you don’t have enough of Heracles yet: he was involved in more adventures, and performed some “minor labors,” called “Parerga” by the Greek. They include killing the Caucasian Eagle, which had picked out Prometheus’ liver daily as Zeus’ punishment for bringing people fire. You can find these minor labors listed on Theoi’s site, which includes depictions on Greek vases of the giants, centaurs, and monsters that he fought.

If you have any comments or questions, or photos and videos to share, please send me a line or use the comment box below! 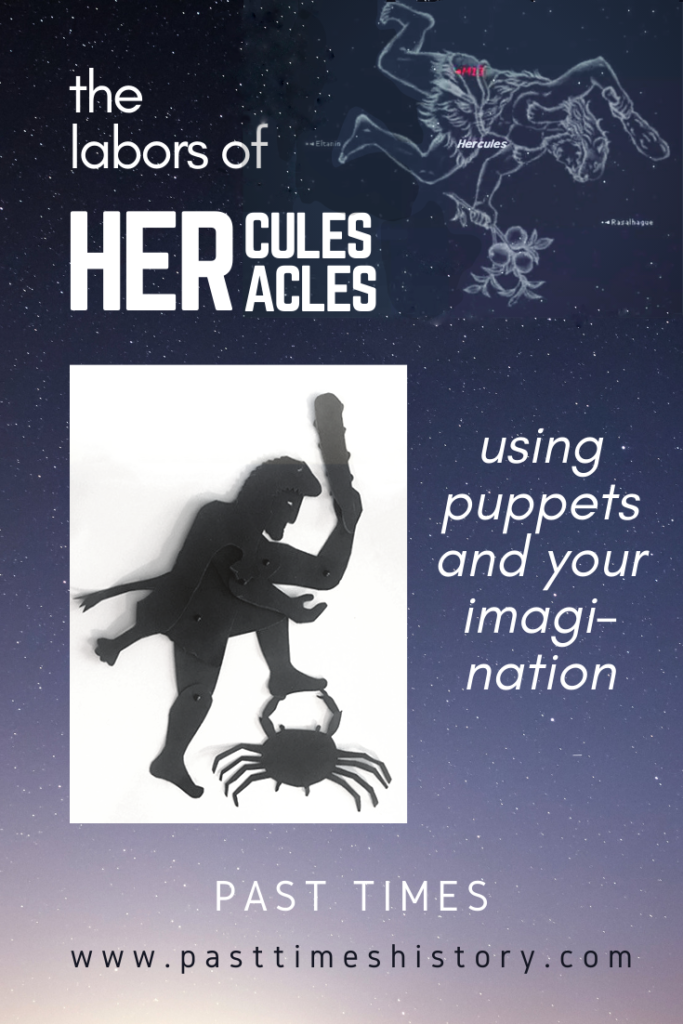